Militaria and military antiques and collectibles from antique edged weapons to military surplus optics and accessories, statues and sculptures, gun parts and other hard to find and unique items for your collection. 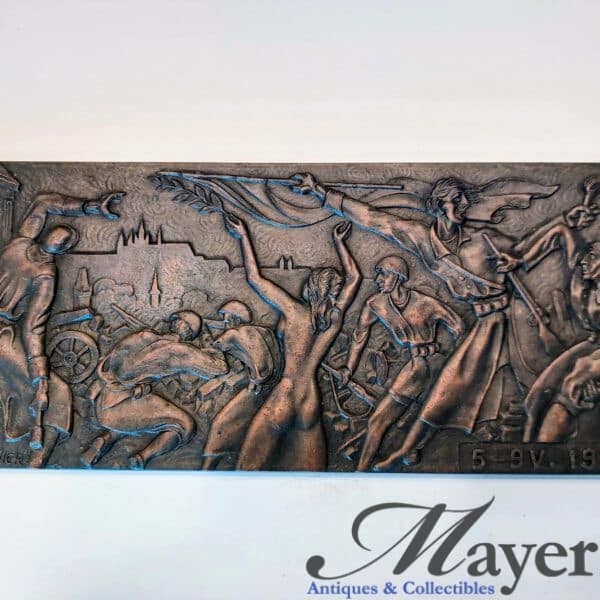 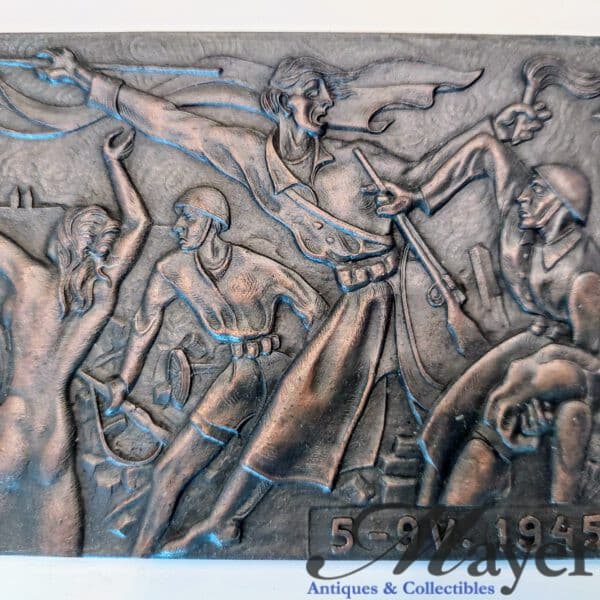 Bronze Plaque of Liberation of Prague by Frantisek Bilek

$327.60
The liberation of Prague is depicted here in this bronze plaque by Frantisek Bilek (1907-1985).  The liberation started as a Czechoslovak uprising against the occupying Nazi German regime between the 5th to 9th of May 1945 and later joined by the Soviet Red Army.  The plaque shows citizens and Russian soldiers fighting their way to Prague Castle which is visible in the horizon.  The date of 5-9V 1945 is on the bottom right corner (V for the fifth month). Dimensions 23 cm x 10 cm / 9 inches x 3.93 inches
Add to wishlist
Add to cart
Quick view 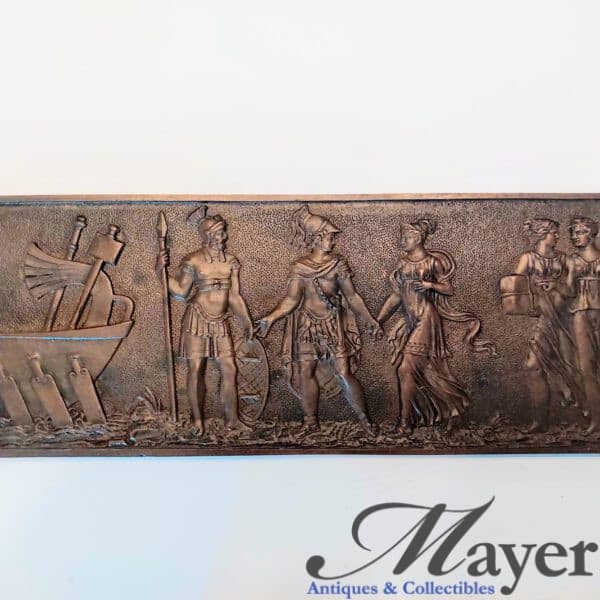 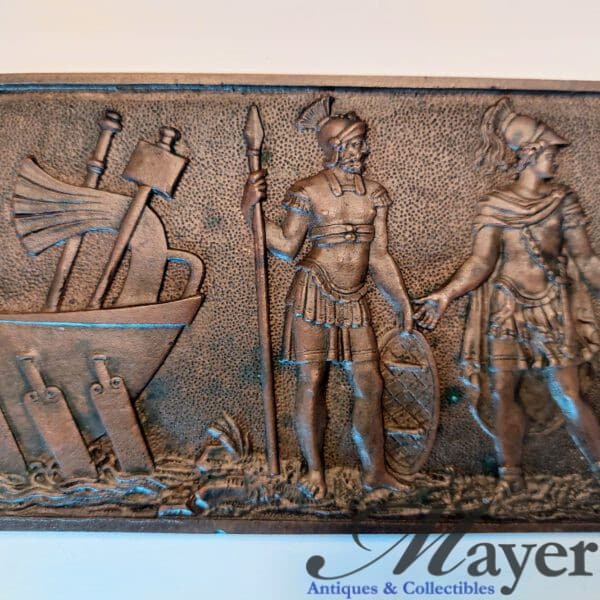 $468.00
A heavy bronze relief plaque of Roman soldiers and women preparing for a ship voyage.  This bronze plaque is relatively contemporary, probably from the 1920's.  Very good casting as the details are all visible and sharp.  A nice decorative Roman style bronze plaque that can add a sense of history to any surroundings.  Unsigned and unmarked, Dimensions 25.2 cm x 9.3 cm / 9.92 inches x 3.66 inches
Add to wishlist
Add to cart
Quick view 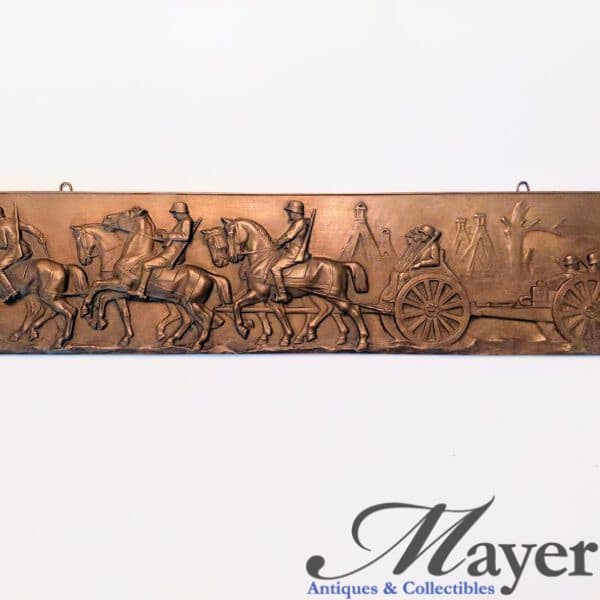 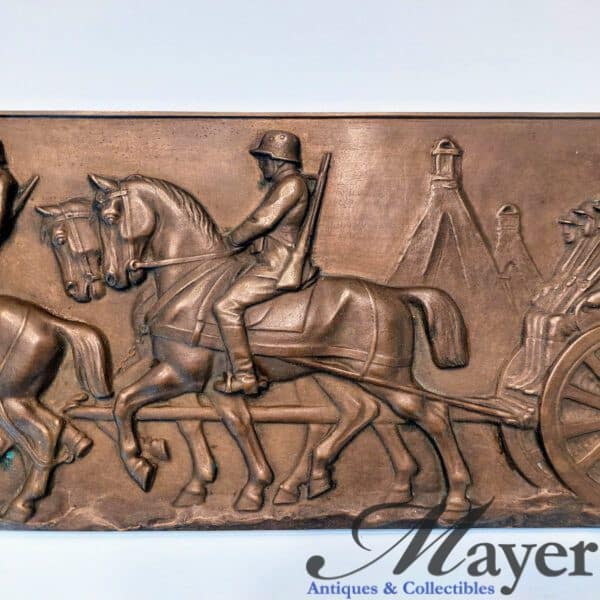 $2,340.00
A special bronze relief plaque of a procession of German WW1 soldiers on horseback pulling an artillery carriage with other soldiers.  The bronze work is excellent showing in high detail the soldiers, their rifles and helmets, the horses and in the background of what seems to be a bombed out town with houses with missing roofs and a damaged tree.  The work is made by Karl Ludwig Manzel (1858-1936) and is signed by him L. Manzel on the lower right as well as K. Grabert. Chlg.I. on the width of the frame. Dimensions 59.4 cm x 13.5 cm / 23.38 inches x 5.31 inches 2.44 Kg / 5.37 lbs
Add to wishlist
Add to cart
Quick view 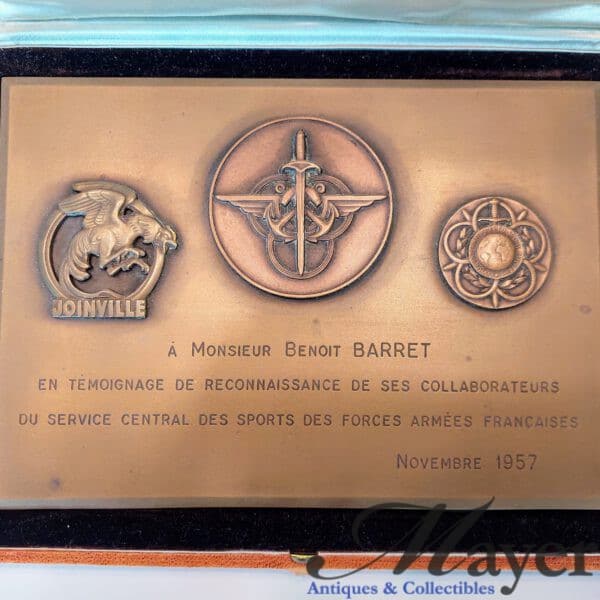 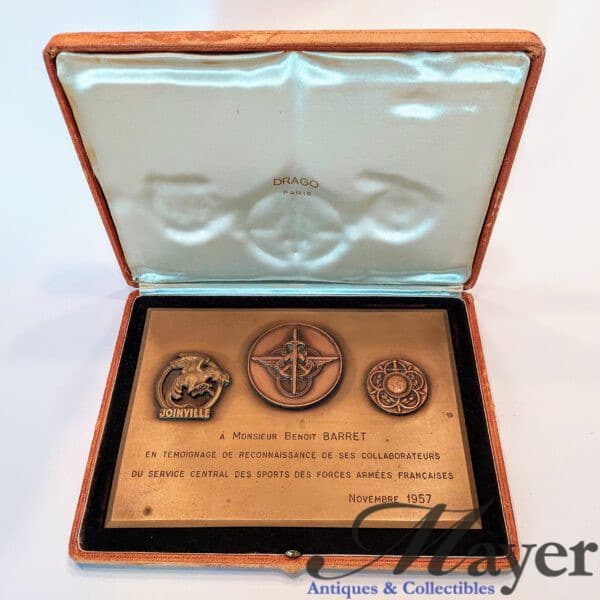 $468.00
A French military recognition bronze plaque to Mr. Benoit Barret for his collaboration with the Central Sports Service Of the French Armed Forces, dated November 1957.  The plaque is enclosed in the original wood box with inside satin material.  The plaque is made by the famous Drago company in Paris, specializing in military insignias and related decorations since 1920. Dimensions 17 cm x 9.5 cm / 6.7 inches x 3.74 inches Weight: 1 Kg = 2.2 lbs.
Add to wishlist
Add to cart
Quick view 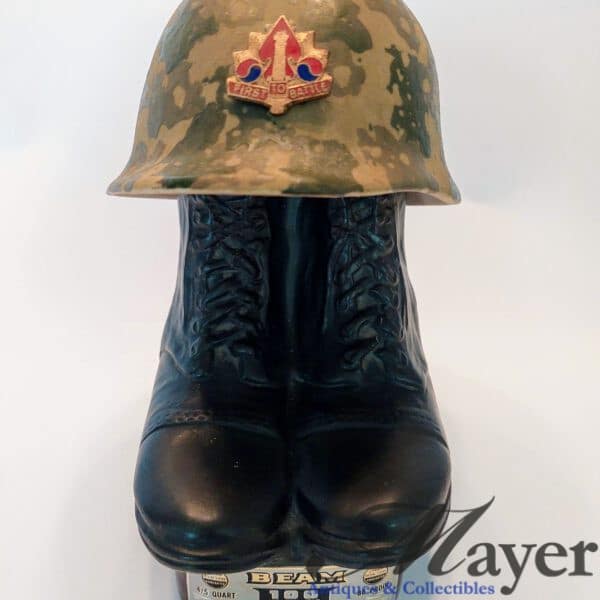 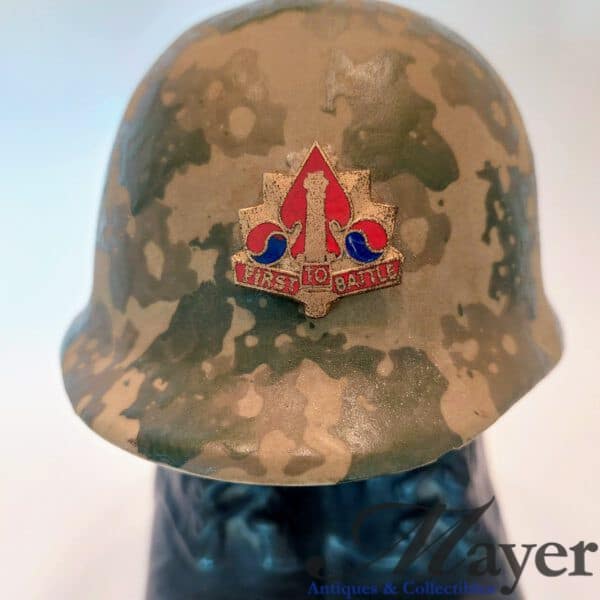 $105.30
Jim Beam Army helmet and boots decanter for 100 month old bourbon whiskey.  The helmet is with a First To Battle insignia of the US Army 5th Artillery Group.  The base has a sticker stating: "Don't let alcohol cut your tour of life short".  Although many of these were made, to find one with the insignia and sticker on the base is rare, especially in the excellent overall condition of this piece. Dimensions 11 cm x 20 cm/  4.33 inches x 7.87 inches
Add to wishlist
Add to cart
Quick view 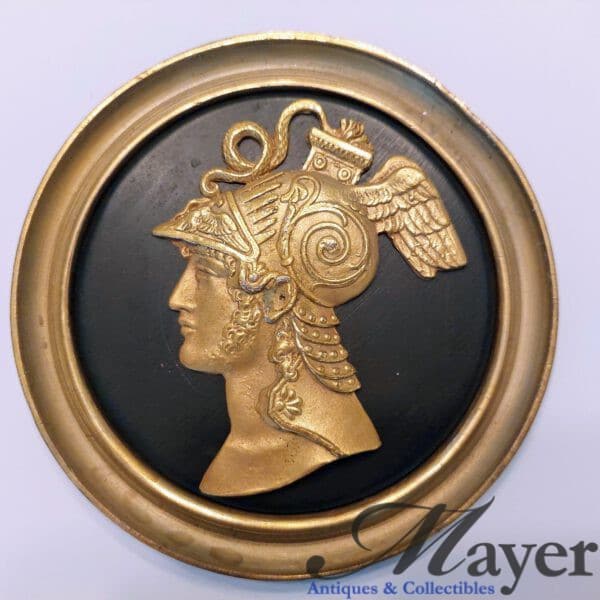 A Pair of French Medallions For Wall Hanging 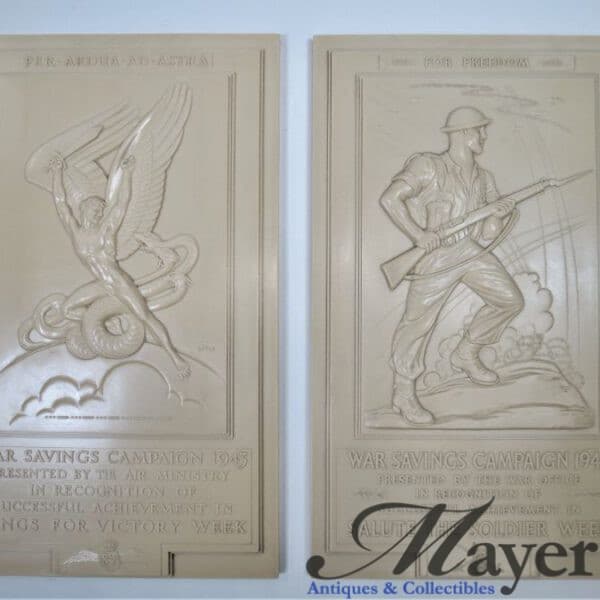 $1,638.00
A set of two British War Savings Campaign plaques of the larger size of 57x33cm, one of Salute The Soldier Week 1944 and Wings For Victory Week 1943.  These are very rarely sold together as a set, in this size and this condition.  The plaques were made by De La Rue Plastics of molded Urea Formaldehyde / White Bakelite.  De Le Rue plastics company of Walthamstow London made the War Savings Campaign plaques for the War Office, and were presented to organizations and various other groups in recognition of efforts made to War Savings once attained certain savings targets. They were not awarded to individuals, so could often be seen displayed in village halls / offices, and community buildings.  The aim was to sponsor military equipment by the homefront civilian community.  Each county was set a target of money to raise and local civic leaders were presented with plaques as a reward for the fund raising efforts. The first plaque is the For Freedom - Salute The Soldier Week of 1944 featuring a British infantry soldier holding his Lee Enfield rifle with mounted bayonet showing explosions and aircraft in the background going to battle.  These were presented by the War Office. The second plaque is the Per Ardua Ad Astra - Wings For Victory Week of 1943 presented by the Air Ministry.  Per Ardua Ad Astra is a Latin phrase meaning "through adversity to the stars" which is the moto of the Royal Air Force.  This plaque features a winged warrior fighting a three-headed monster representing the enemy Axis Powers of Germany, Italy and Japan.  Below that the letter V (for Victory) is shown 5 times in Morse code. Both plaques are in excellent condition!
Add to wishlist
Add to cart
Quick view 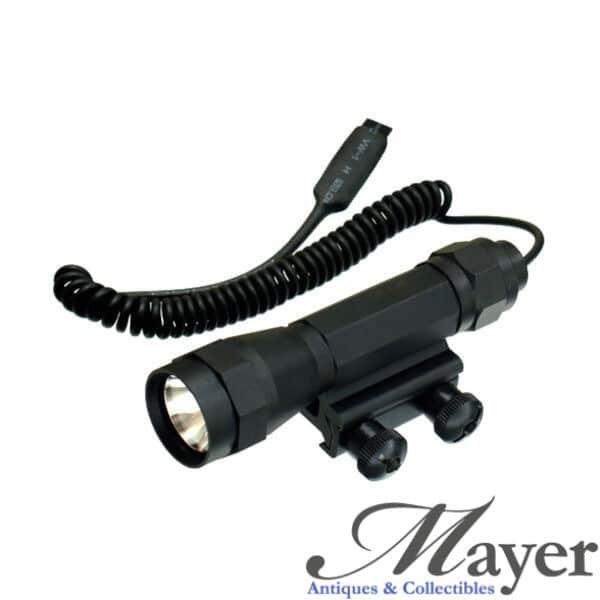 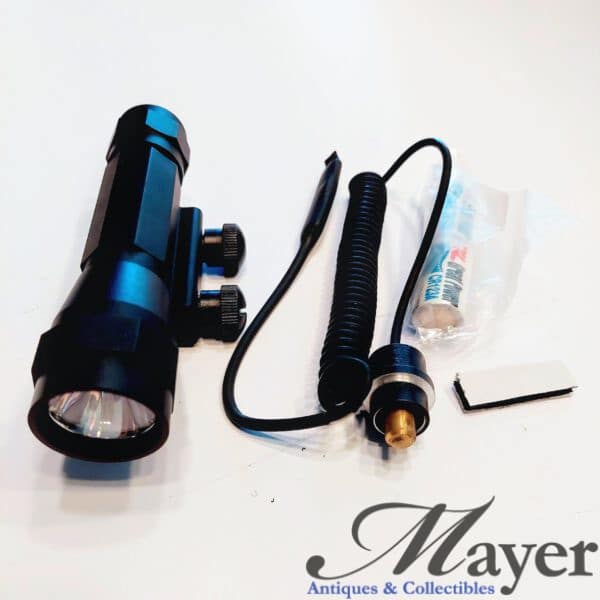 $111.15
Leapers UTG model LT-TL101 tactical flashlight with integral rifle mount and PTT cable remote pressure on/off switch. This is a discontinued item by the manufacturer and is very difficult to find in the quantities that we have available. Batteries may not work. Dealer specials are available for the purchase of all 50 pieces or all current inventory. Features: Specifications:
Add to wishlist
Add to cart
Quick view 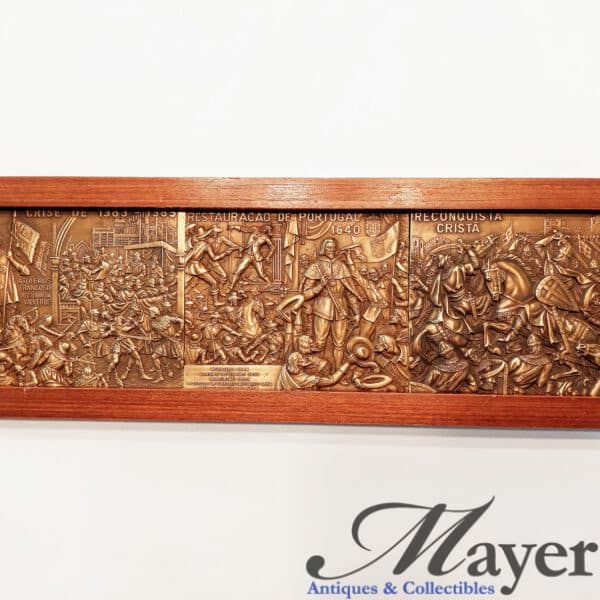 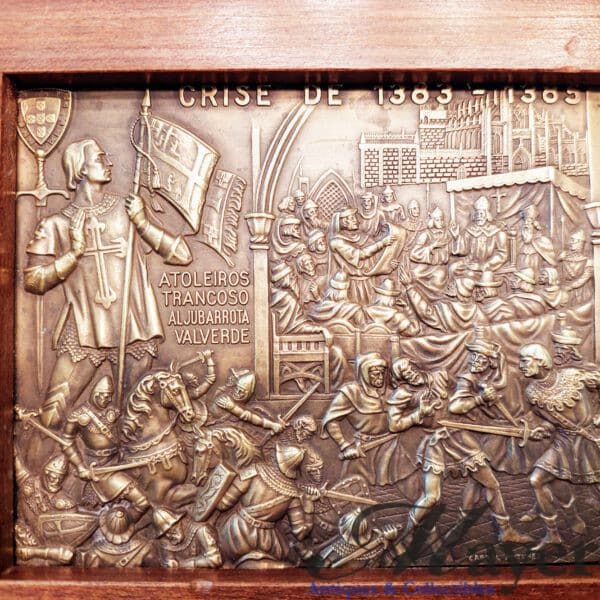 $468.00
A wood framed three pieced plaque depicting three major periods of the history of Portugal. The three Portuguese history eras depicted are from left to right: Portuguese interregnum crisis of 1383–1385 (Crise De 1383-1385) was a civil war in Portuguese history during which no crowned king of Portugal reigned. The interregnum (a period of discontinuity or "gap" in rule of the land or country) began when King Ferdinand I died without a male heir and ended when King John I was crowned in 1385 after his victory during the Battle of Aljubarrota. Portuguese Restoration War 1640–1668 - was the war between Portugal and Spain that began with the Portuguese revolution of 1640 and ended with the Treaty of Lisbon in 1668, bringing a formal end to the Iberian Union.  The Iberian Union was the dynastic union of the Kingdoms of Castile and Aragon of Spain and the Kingdom of Portugal under the Castilian Crown that existed between 1580 and 1640. Reconquista Crista 711-1492 - the reconstruction period in Iberian history in which the Christian kingdoms of Spain and Portugal fought the invading Muslim Umayyad empire of Arab-Berber forces.  After the surrender of Granada in January 1492, the entire Iberian peninsula was controlled by Christian rulers. Behind each intricate bronze relief is a brief description history written by Professor Verissimo Serrao of Lisbon University.   Dimensions Height: 11.7 cm (4.6 inches) Width: 35.8 cm (14.09 inches)
Add to wishlist
Add to cart
Quick view 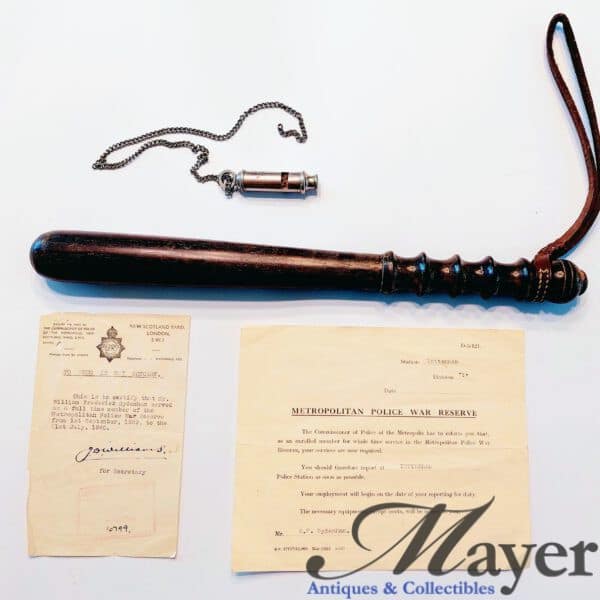 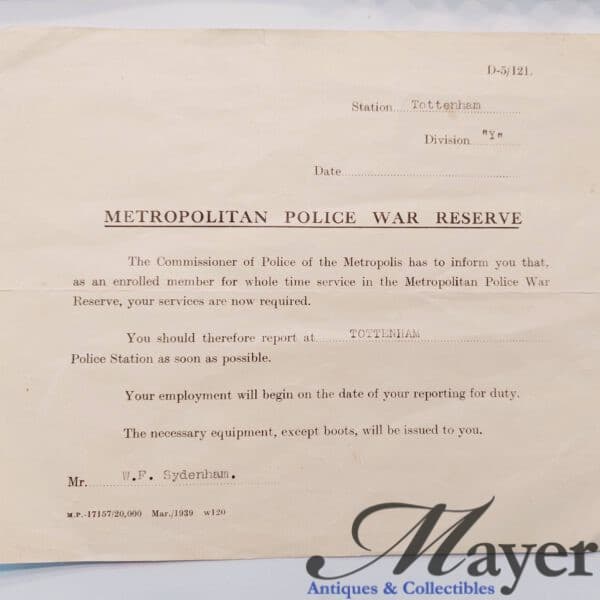 $468.00
British Tottenham Metropolitan Police War reserve set of a police whistle and a police club with authenticity papers stating that these belonged to William Frederick Sydenham from 1st of September 1939 to 21st July 1940.
Add to wishlist
Add to cart
Quick view 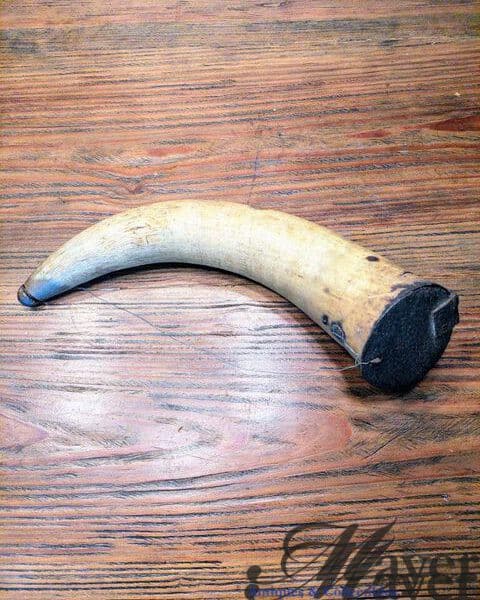 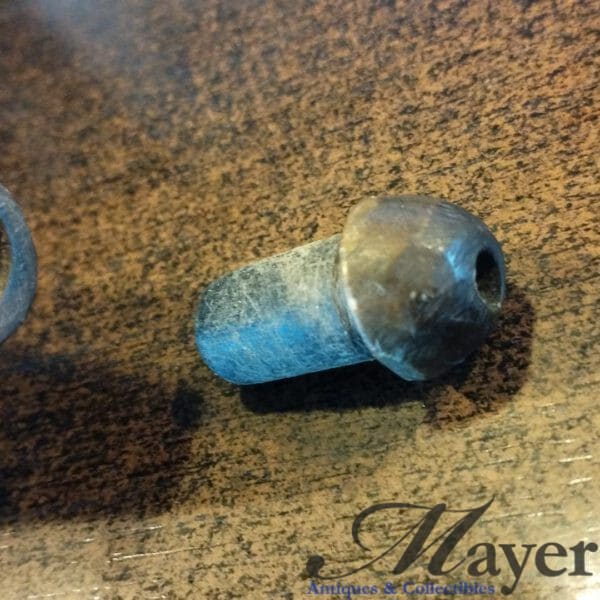 $409.50
An antique British light infantry gunpowder horn made of ox or cow.  It is estimated to be from the 18th century, all seem to be original. There are initial T.P. carved or branded into the horn.  Original lid and cap on the ends of the horn. The emblem is of the British light infantry regiment showing the ribbon and tassels connected to a gunpowder horn.
Add to wishlist
Add to cart
Quick view 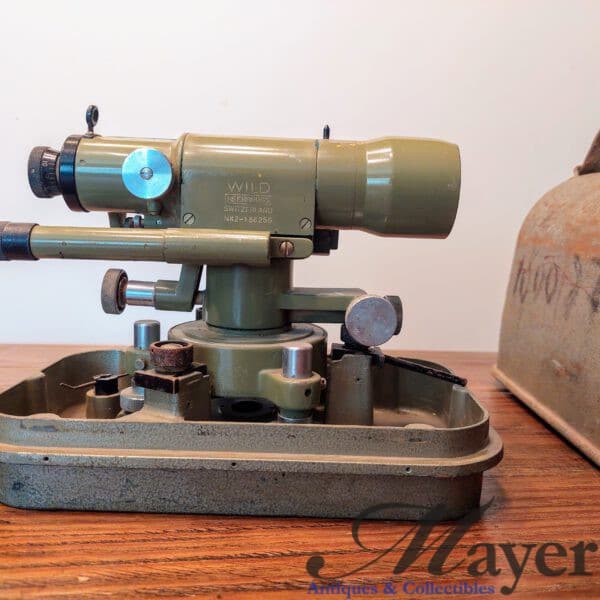 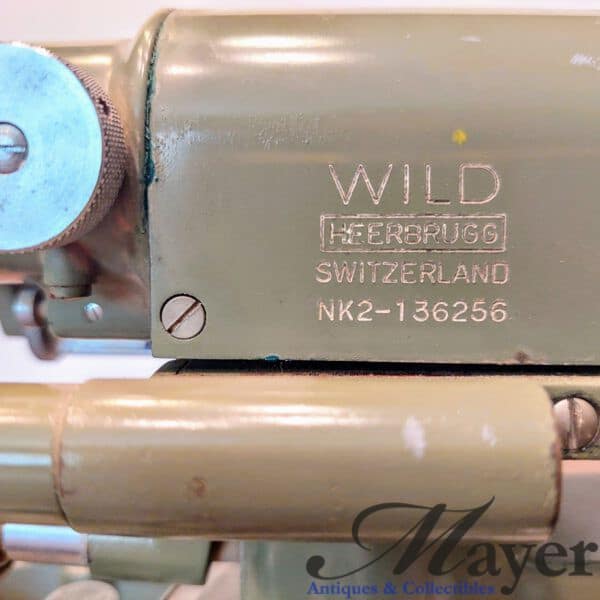