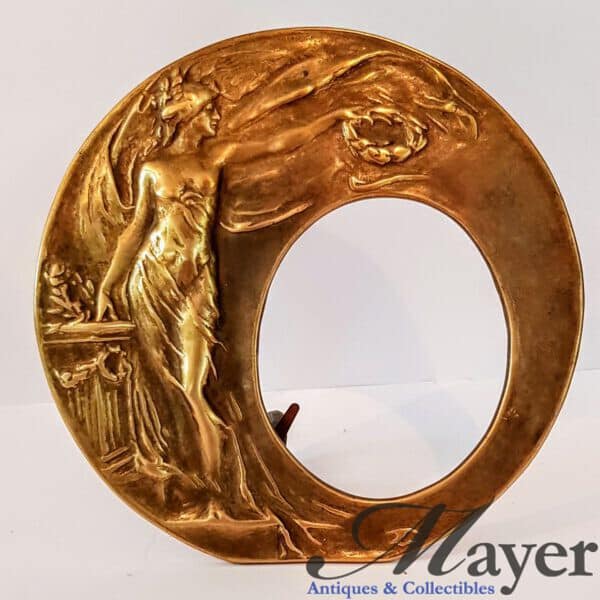 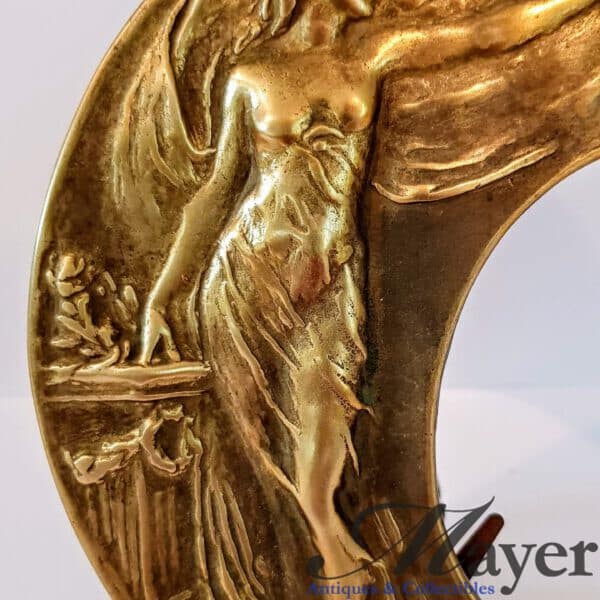 $157.95
British Art Nouveau brass picture frame featuring the goddess of victory (Victoria by the Romans and Nike by the Greeks) holding a laurel above the photo hole.  These picture frames usually featured soldiers that came back from war depicting them as war heroes.  It is made in England probably in the Victorian era (1837-1901) made of an ornate cast brass relief with clips in the back for securing the photo and a movable stand at the back as a table top display. Dimensions: Height: 16 cm (6.3 inches) Width: 16 cm (6.3 inches)
Add to wishlist
Add to cart
Quick view 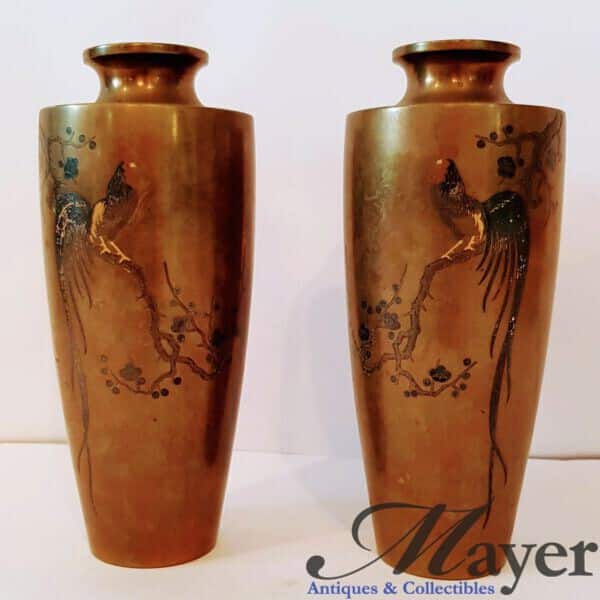 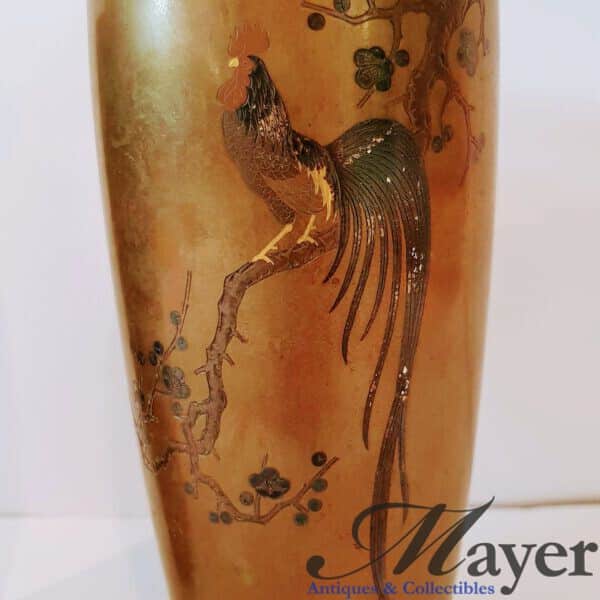 A Pair of Japanese Bronze Vases with Roosters

$930.15
A pair of Japanese bronze vases with roosters sitting opposite each other on a cherry tree. These Japanese vases are signed by the artist on the back of each vase and stamped on the bottom. They are in very good condition and are a beautiful decorative antique. This pair of Japanese bronze vases with roosters was made probably in the early 20th century. Dimensions: Height: 21 cm (8.26 inches) Width: 9 cm (3.54 inches)
Add to wishlist
Add to cart
Quick view 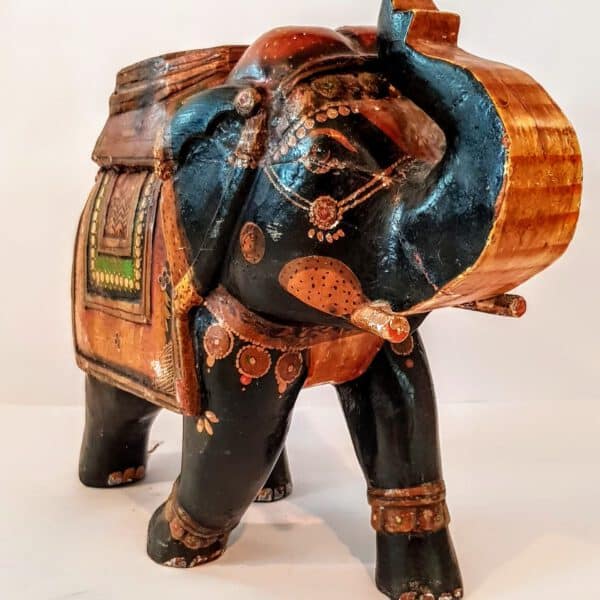 $292.50
A very decorative Indian elephant wooden sculpture, hand carved and hand painted, probably from the beginning to mid 20th century. It has vibrant colors consistent with the Indian way of coloring, his trunk is up to symbolize good fortune and vitality, cracks throughout the piece which give it nice character and show its age. This is not the one of the small Indian wooden sculptures that can be seen in many other online antique shops or e-commerce sites.  Please make sure that you take into account the size of this item. Dimensions: Height: 28 cm (11 inches) Length: 35 cm (13.77 inches) Width: 13 cm (5.11 inches)
Add to wishlist
Add to cart
Quick view 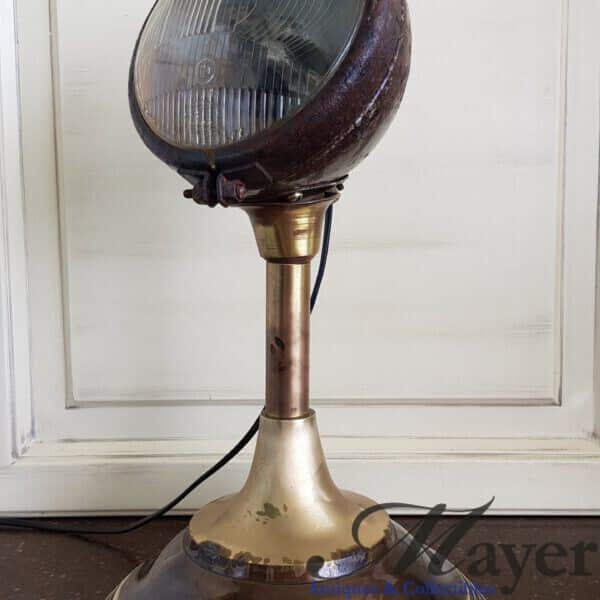 $251.55
A unique and one of a kind industrial desk lamp made of brass and a headlight made by the Hella car lighting company in Germany.  The desk lamp is with a nice and rough finish and patina just like we like it. On the glass the writing is: E1/4414/Hella/4-77606/Made in Germany This industrial lighting style desk lamp works and is fitted electrically with a type C 2.5 amperes power plug with on/off switch button.  This can easily be changed to your local electric system by any electrician. Dimensions: Height: 41 cm (16.14 inches) Base width: 24 cm (9.44 inches) Lamp diameter: 16 cm (6.30 inches)
Add to wishlist
Add to cart
Quick view 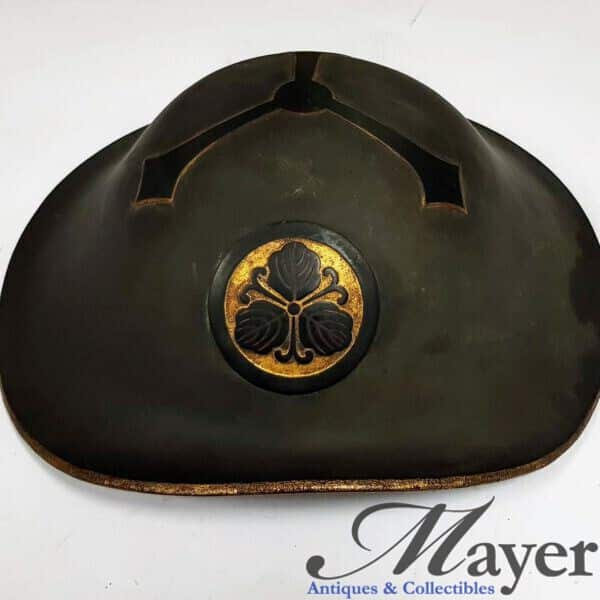 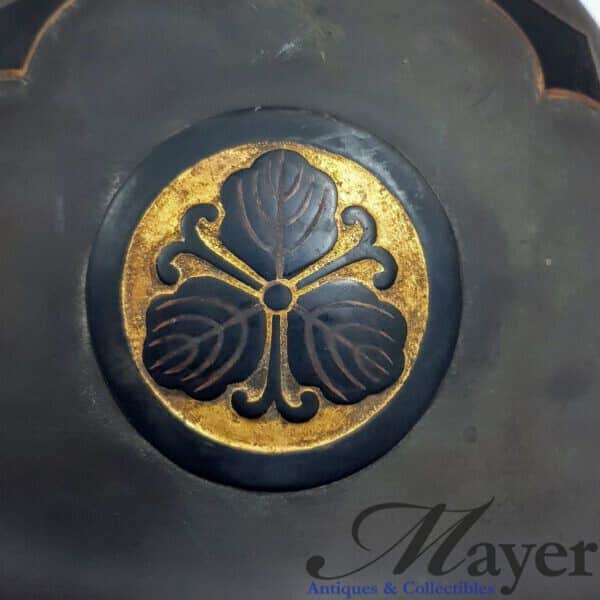 $930.15
Samurai Bajo Jingasa (Riding Battle Hat) were worn mainly by officers a the end of the Sengoku period (1467-1615) and through the Edo period (1603-1868) and a little after.  Traditionally a defensive helmet, they were allegedly first crafted from wood, leather, lacquered rawhide, then iron and later steel.  The combination of these elements provided a good head protection against sword blows.  The bajo-gasa jingasa are shaped like low round hills, believed to decrease wind resistance while on horseback.  The inside was padded with a cushion liner secured by ribbons that would be tied and secured under the chin. The Jingasa were traditionally lacquered in black and would typically bear the mon (crest) of their clan or that of their unit, allowing forces to be easily identified in the battlefield and from afar.  These mon were often painted in gold color like in this bajogasa for sale. The Samurai bajo-jingasa here is in excellent condition showing the mon (crest) of the Maru Ni Tsuru Gashiwa. It is probably from the late Edo period (mid 19th century).   Dimensions: about 36 cm x 34 cm (14.17 x 13.38 inches)
Add to wishlist
Add to cart
Quick view 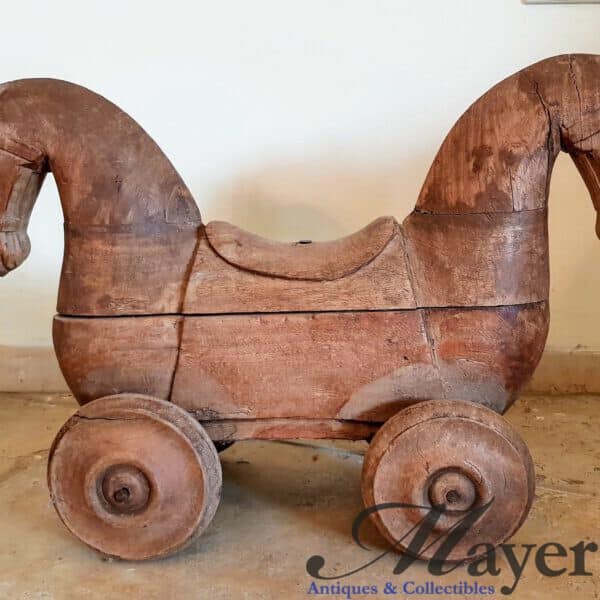 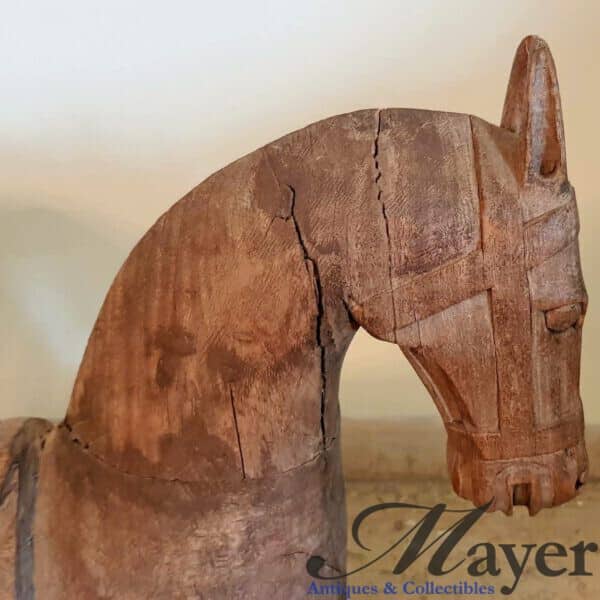 $795.60
A folk art double headed wooden horse on wheels that twists and reveals two compartments in the horse's base. A beautiful piece of hand carved wood made most likely in India for a child in the early 20th century. One of the horse heads is a bit cracked and the piece shows its overall age of a hundred year old item. Dimensions: Height: 45 cm (17.71 inches) Width: 64 cm (25.20 inches) Shoulder width with wheels: 26 cm (10.23 inches)
Add to wishlist
Add to cart
Quick view 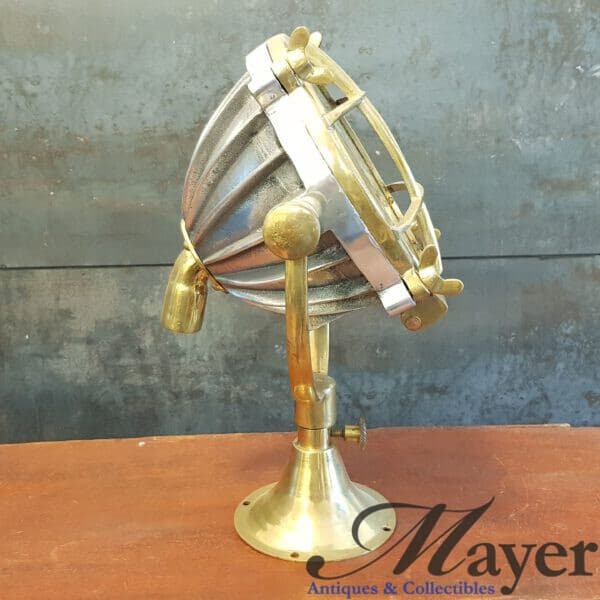 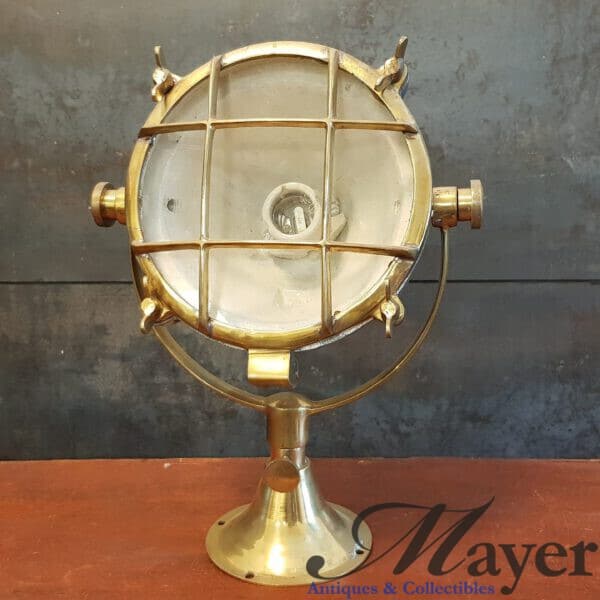 $321.75
Industrial lighting at its best!  A beautiful nautical brass table lamp made of a ship's search light.  This industrial style light can be a great addition for an office desk or a nice piece for interior decoration. Dimensions: Height: 33 cm (13 inches) Width: 25 cm (9.84 inches) Base width: 12 cm (4.72 inches)
Add to wishlist
Add to cart
Quick view 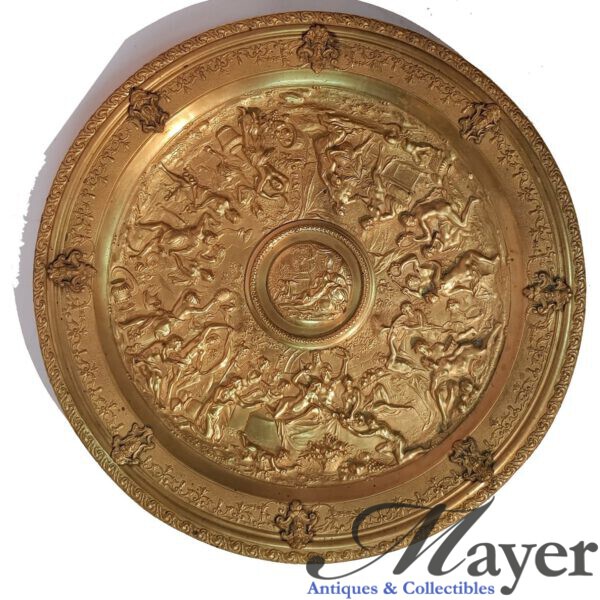 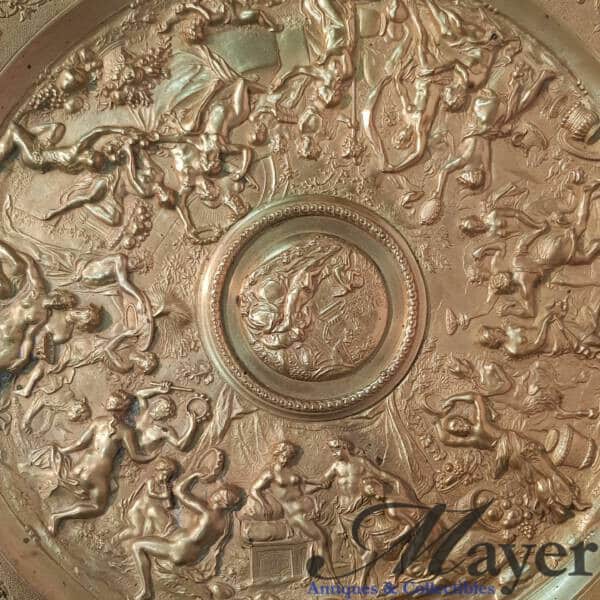 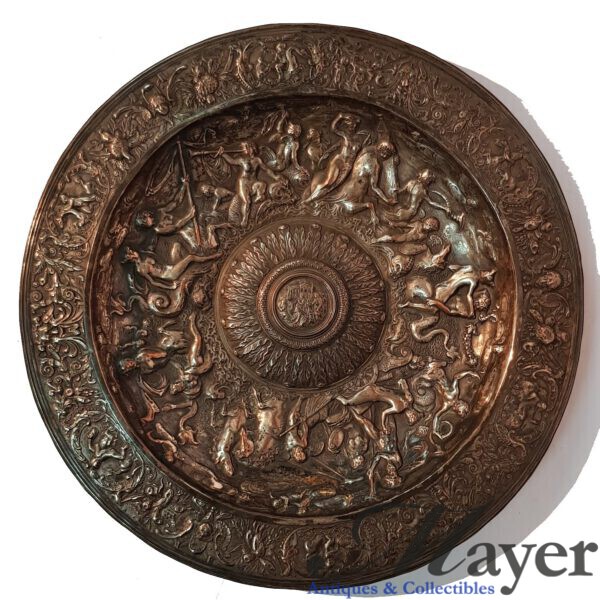 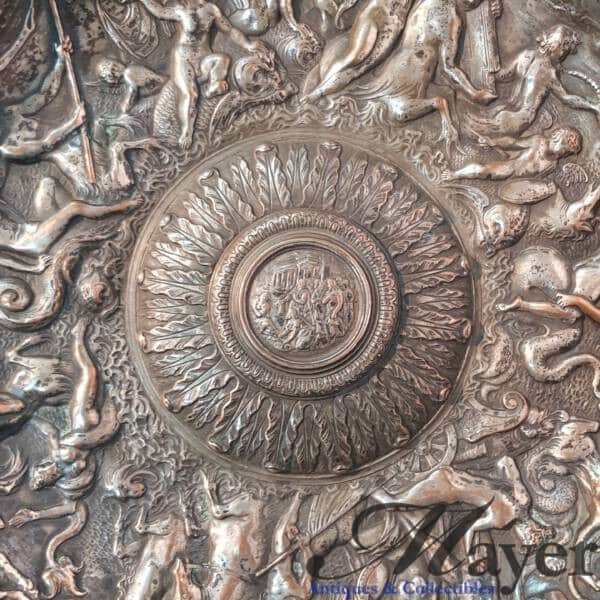 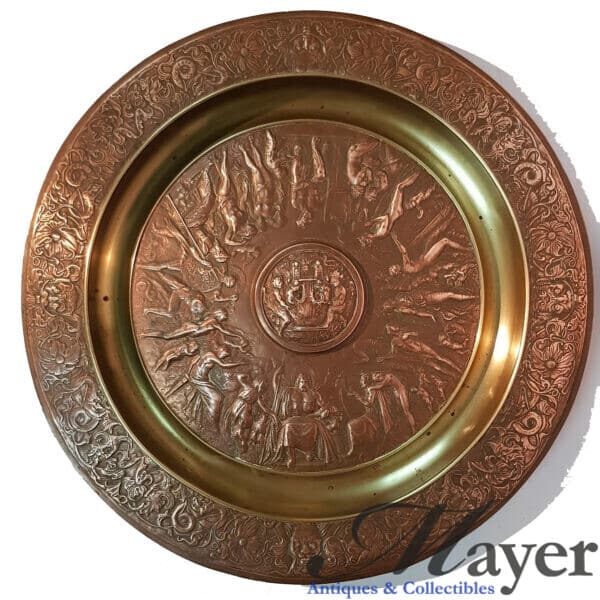 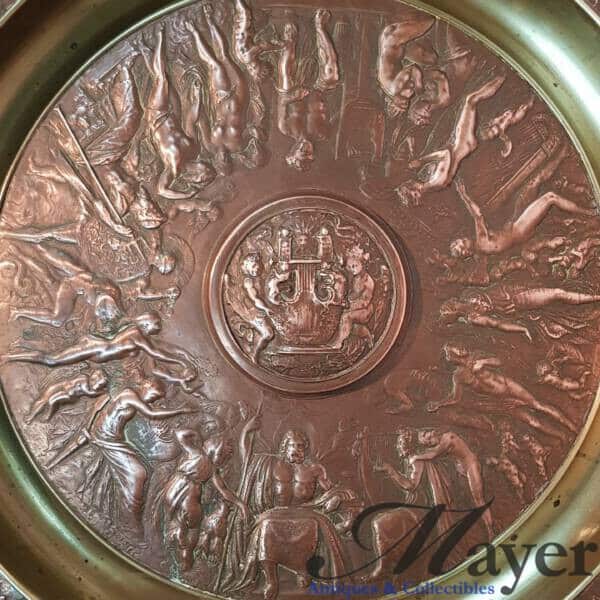 $936.00
A cooper plate featuring the goddesses and gods of Greek mythology.  Zeus is seen seated on his throne as king of the gods of Mount Olympus, god of the sky, thunder and lighting.  Other gods that can be seen are pan playing his flute, Poseidon with his trident, Ares god of war wearing his helmet and armor and many others. Probably German made in the early 20th century. Dimensions: Diameter: 52 cm (20.47 inches) Weight: 2.5 kg (5.5 lbs)
Add to wishlist
Add to cart
Quick view 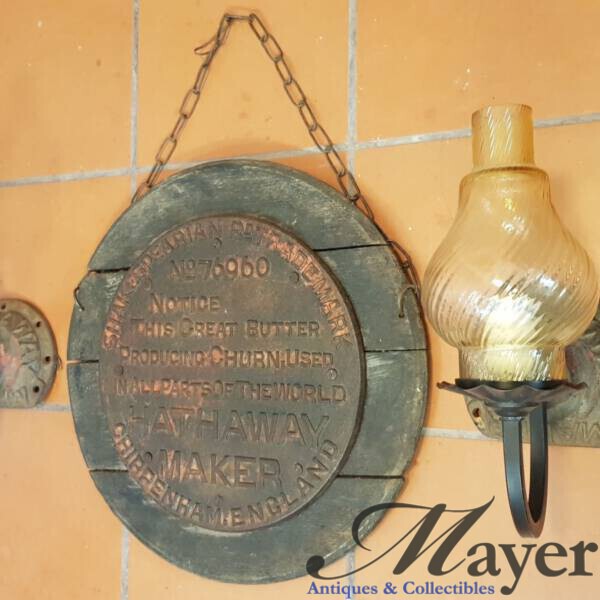 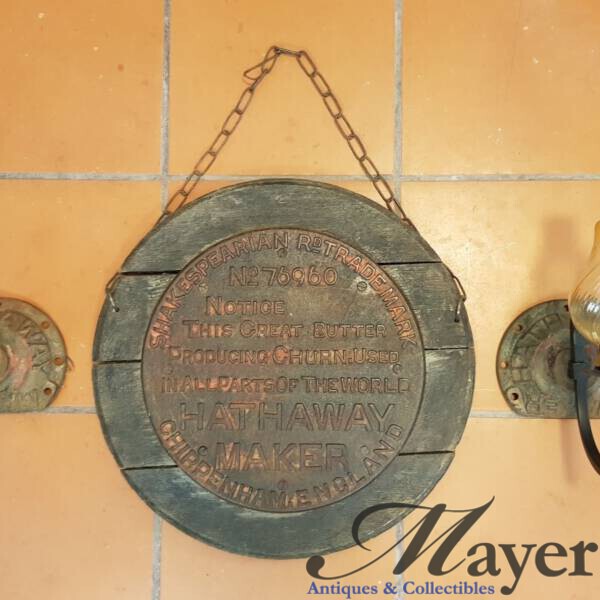 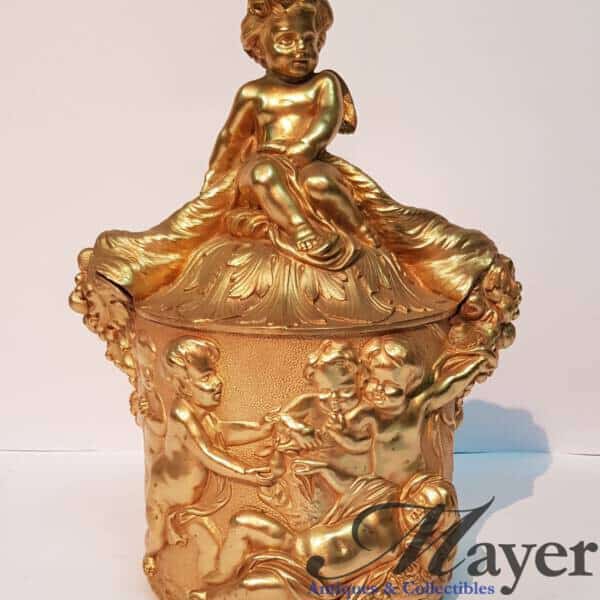 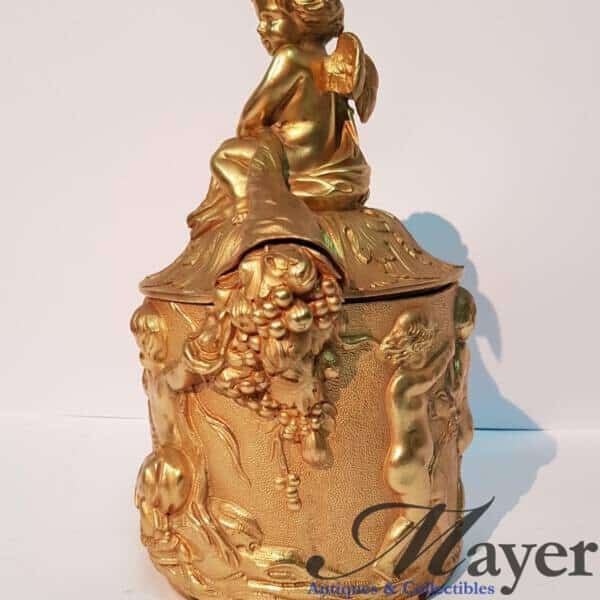 An exquisitely decorated rococo style golden gilded bronze jar with decorative lid featuring a cherub and other angels on the jar.  On the front of this rococo jar four cherubs are featured with one of them asleep.  In the back of the jar two cherubs are dancing with the Greek god Pan.  This rococo style decorated jar or box is made in the ormolu manner (bronze gilded in gold color).  French or Italian made, middle to late 19th century. Dimensions: Height: 25.5 cm (10 inches) Width: 18.5 cm (7.28 inches) Diameter: 12.3 cm (4.84) Weight: 3.33 kg (7.34 lbs)
Add to wishlist
Read more
Quick view